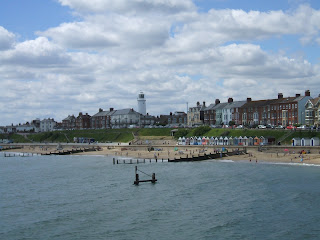 On the basis that I have to start somewhere, here goes. I've been wanting to write a blog for ages but now I have the tools to begin, well, it's a different matter! I'm hoping that it will just evolve and that I will sit back and watch.

I have just finished reading "Regatta" by Libby Purves, having bought the copy whilst visiting Southwold on holiday. The preface says that all the places are fictitious but it is not difficult to imagine the setting for the story as it is so like the Walberswick area where we stayed. It does have a touch of "Swallows and Amazons" about it too, though with a more twenty-first century feel.

We were looking forward to crossing the river from Walberswick to Southwold side of the harbour, and were not disappointed. We were rowed across by the Amazon daughter of the boatman who had been there on our last visit some years ago. We had a lovely walk along the beach to the 'new' pier. It's no longer new, but we have called it that since our first viewing in 2002. On that occasion Southwold was crowded to watch the fly past of Concorde and the Red Arrows en route for Buckingham Palace and the Mall to celebrate the Queen's Golden Jubilee. It was quite peaceful when we visited a fortnight ago, but I read yesterday that Gordon Brown had chosen it as his holiday venue too, and that the peace was being disturbed by demonstrators who were less than happy with his policies.

On our way to Suffolk we stopped at a lovely National Trust property, Oxborough Hall. It a moated manor house (home to several swans and their cygnets) which had fallen into disrepair some decades ago and was under threat of demolition. Fortunately a far-sighted benefactor saved it from the developers. We were told that though of considerably advanced years, she still visits the family who occupy a suite in the house. One particular photograph caught my attention as I did the tour. It showed an Oxford Eight, Head of the River in 1938. Above the photograph was a blade on which were the names of the crew. It was a strange co-incidence as I was just reading William Woodruff's "Shadows of Glory", which begins with such a picture and follows the fate of the eight men and their cox through the years of the Second World War. I found it incredibly sad, but had a greater insight into the war from this novel than I had previously had from any text book. That story was very much in my mind as I watched the young rowers of today pushing themselves to their limits at the National Championships at Holme Pierrepont. There has been rejoicing in this family over both the Nat Champs and Henley Royal this year.
http://www.akrowing.com/

I shall be linking this blog from my website. There will be regular updates.
Posted by sheilap at 12:58 No comments: